As of November 1st 2022 Marine Rescue Technologies is part of

Scroll down to look back through our history

Aged just 20, our founder David Marshall is thrown overboard into the shark-infested waters of the South Pacific. After several hours, he is rescued – by complete chance – by a passing supply barge. The idea for MRT and the Personal Locator Beacon (PLB) was born as a result of this incident. 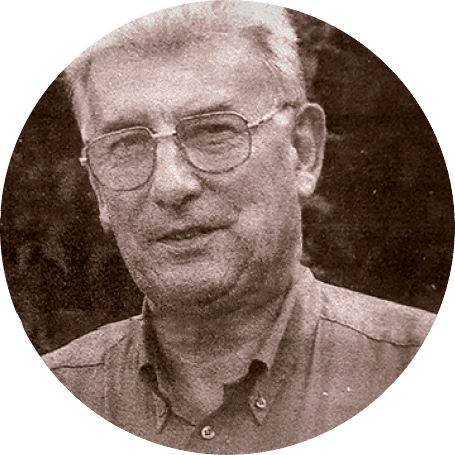 A prototype of the first Personal Locator Beacon is supplied to GBII Joint Services for their entry into the Financial Times Clipper race to Australia, the result of a joint venture between the Royal Radar Establishment and Farnborough. 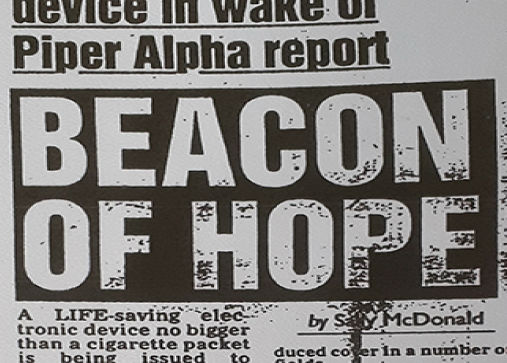 Ken Kerr, one of MRT’s first customers, is successfully rescued 700 miles off Newfoundland in the Mid-Atlantic after activating his LOCAT radio distress beacon following a capsizing. His beacon signal was picked up by a Concorde flying overhead on its way to New York. The jet subsequently alerted the authorities who dispatched a C130 from Halifax, Nova Scotia, to pinpoint the exact location before diverting a cargo ship to complete the rescue. 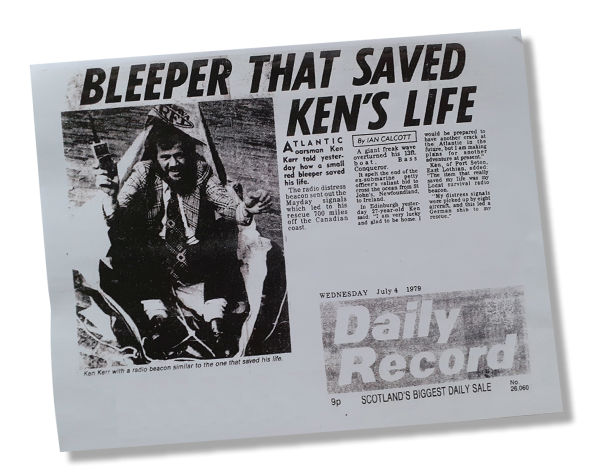 Doctors parachuted into the ocean in a desperate attempt to help four stranded yachtsmen. They were alerted and deployed by rescue authorities who picked up a signal from the Yachtsmen’s LOCAT distress beacon. 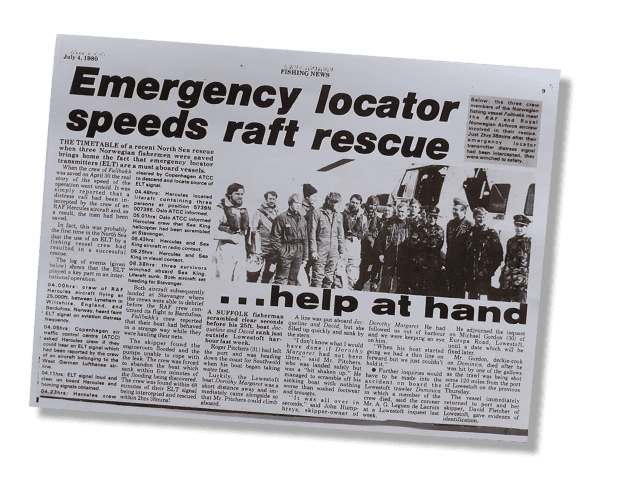 Having abandoned their blazing trawler in the North Sea, 180 miles off the North East coast, three Hull fishermen are plucked to safety after a helicopter rescue operation. Their radio distress beacon signal had been picked up by a Search & Rescue satellite, which led to the scrambling of a Sea King helicopter. 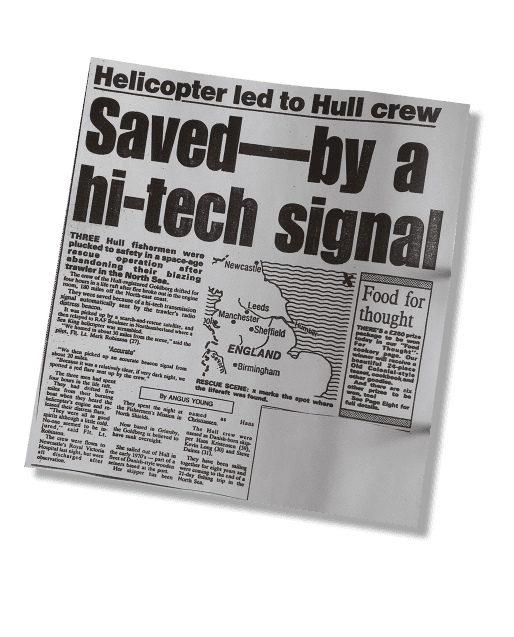 Oil giant BP pioneers the use of Personal Locator Beacons in the wake of the official Piper Alpha report, the first UK company to do so.

Lifesaving is equipment used in the round the world yacht race by Joint Services Entry – Satquote British Defender. 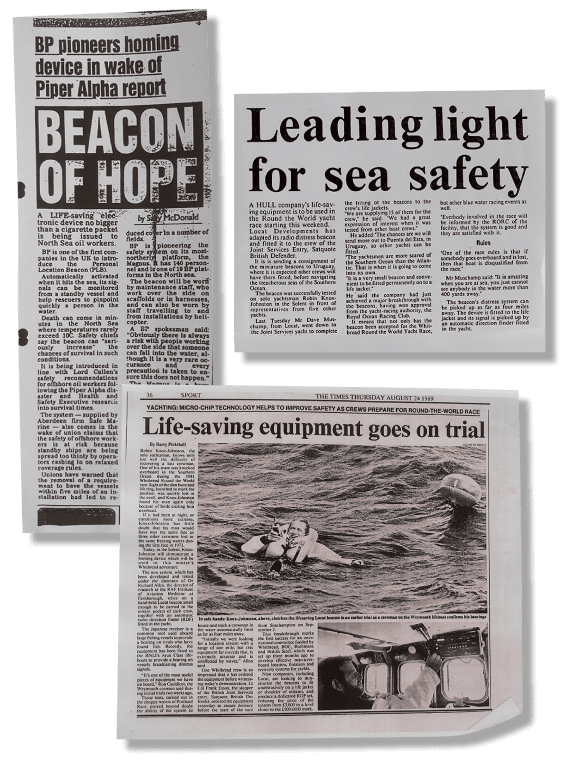 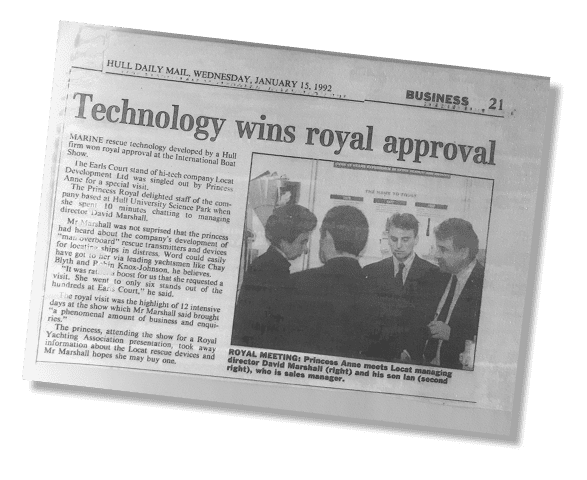 The design for the first Sea Marshall PLB7 (pictured) is taken from concept to production. 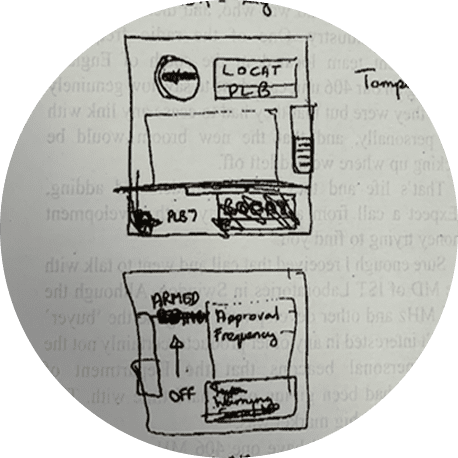 Yachtsman Tony Bullimore is saved after his distress beacon is picked up by the Australian Navy. His yacht capsized in a catastrophic storm during the 1996-97 Vendée Globe, a solo around-the-world yacht race. He survived four days in the Southern Ocean, his immersion suit prevented hypothermia and his locator beacon made sure he was found. 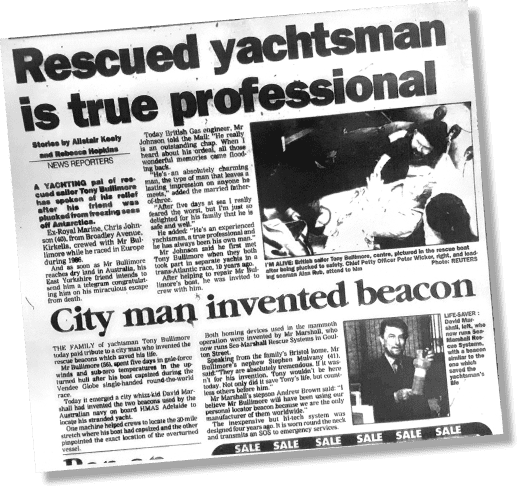 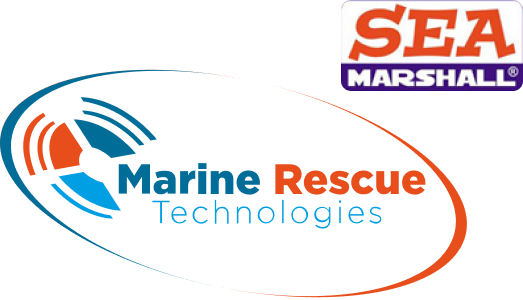 Development continues with the release of the PLB-8 featuring a robust waterproof housing to protect it from heavy usage and damage. The unit was a welcomed upgrade for those working in various offshore sectors. 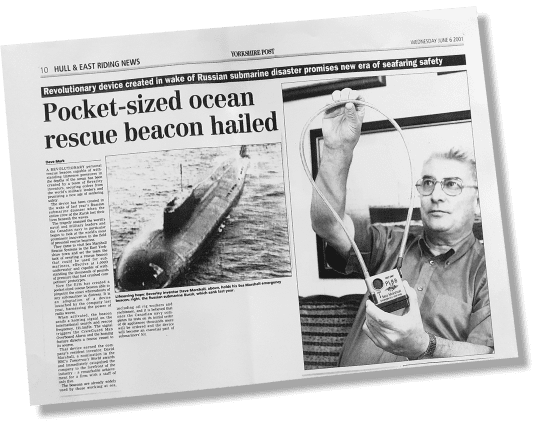 In less than 5 years from creation, more than 32,000 PLB-8 units are officially in operational use within the Oil, Gas and Maritime industries around the world. 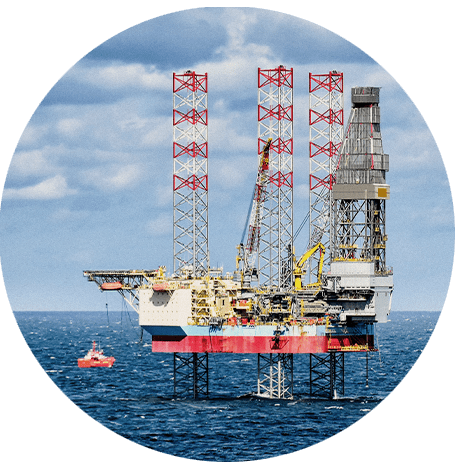 The updated Sea Marshall AU9 Personal Locator Beacon is released, with ATEX Zone 2 approval and lifejacket integration capabilities. The AU9 helps the Sea Marshall brand go on to become one of the most recognised names in the commercial offshore sector. 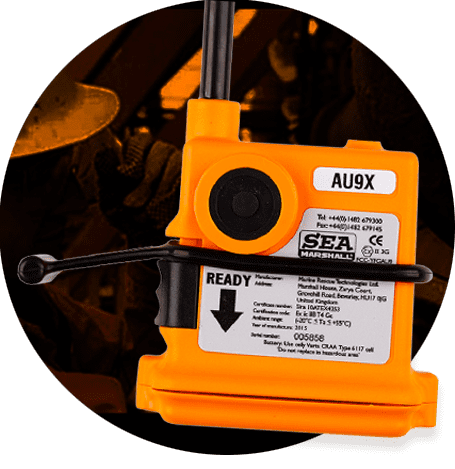 The ‘sMRT’ brand is created

sMRT was introduced to distinguish PLB’s with innovative AIS technology, the most accurate locating technology available. We would produce all PLB’s with AIS under the sMRT banner moving forward. 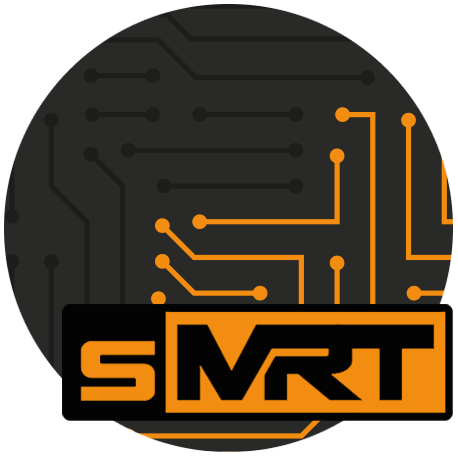 With our global reputation growing, the sMRT AU10 is officially launched, featuring GPS position updates every minute via AIS. This included the sMRT AU10-X an ATEX Zone 2 approved PLB and the flight approved AU10-HT. 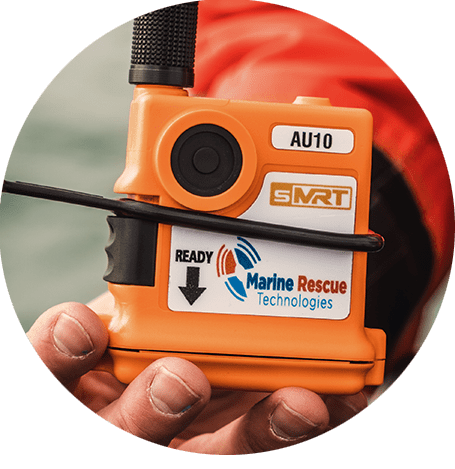 The world’s first and to this day the only IECEx Zone 1 approved PLB. Operating on VHF DSC and AIS, the sMRT V100x allows O&G workers to be equipped with a PLB even in one of the most restricted, potentially explosive environments. 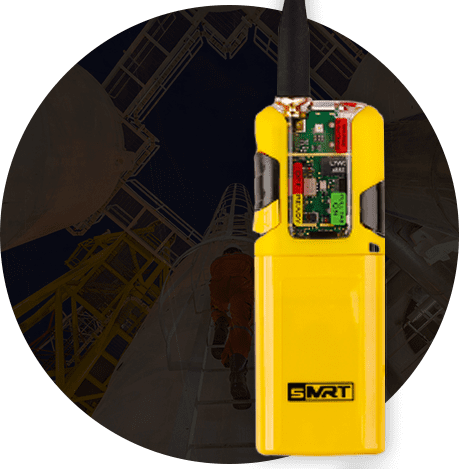 The correct integration of PLB and Life jacket is crucial for ensuring they work to their optimal capability. The paradigm had shifted, customers were asking us to provide a complete solution, so we did! MRT designed the sMRT range of PFD’s in conjunction with key stakeholders across multiple industry sectors which led to MRT offering the most comprehensive man overboard integrated solution available to the commercial offshore marine market. 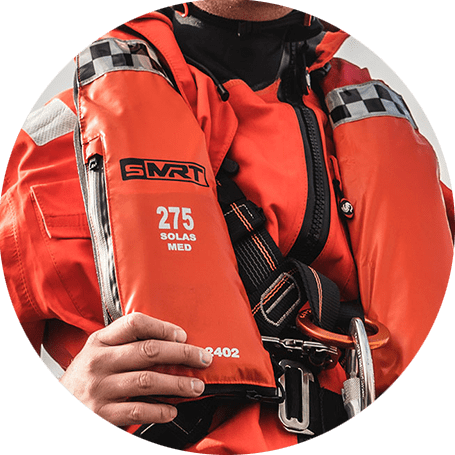 MRT are chosen over multiple industry applicants and awarded a grant by the European GNSS Agency (GSA) to help develop a PLB that can take advantage of the next generation improvements to the COSPAS-SARSAT system, the MEOSAR system. This will see MRT develop a 406MHz capable PLB for the first time in its history. 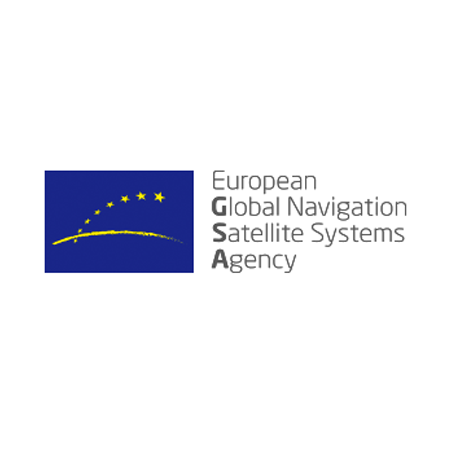 Out with the old, in with the new!

MRT’s brand and image are outdated, so as part of an ambitious growth plan which will see MRT enter new markets, develop new technologies and diversify its product range, MRT introduces its revitalised and fresh new look. 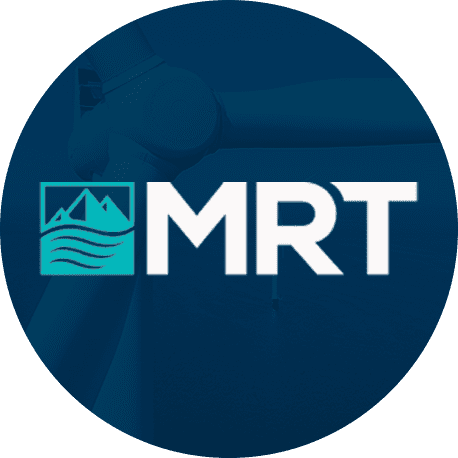 After years of development MRT can finally reveal its plans to release the sMRT Shield, the world’s first 406MHz PLB with water activated AIS. The innovative addition to MRT’s product range will also utilise the Return Link Service (RLS) to once again offer the most comprehensive PLB to both the commercial and recreational marine sector. A land based ruggedised model that operates solely on 406MHz will also be available for the land based market, a first for MRT. 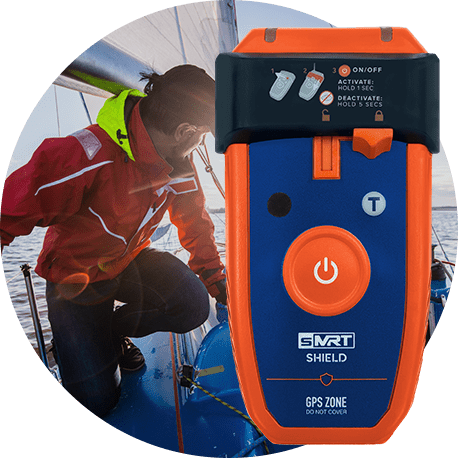 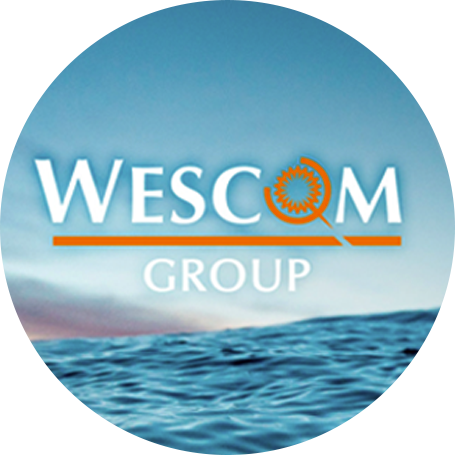